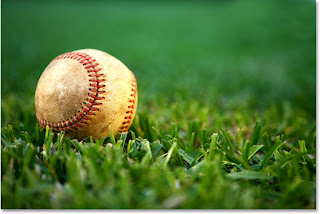 Well, the Rangers did not win the world series, but they came awful close! The determination and heart they showed was outstanding, they gave more then anyone could have asked for, but somethimes that just is not enough.
We will come back stronger next year!
I hope it is the Cardinals and Rangers again! That would be so much fun!
I bought a nice green carved bakelite bracelet for Tanya, I lost the bet and paid the price.
I should stick to quarter keno and bingo, I do not gamble on other stuff and now I remember why!

Anyway on to other stuff...it is going to be a cold winter, so I will snuggle in and sew and scrapbook and make jewelry! Look for new items in my etsy store soon! Great place to go Christmas Shopping, free shipping always and you can shop in your jammies!

See you all for spring training!!
Posted by Jackie at 9:38 AM No comments:
Email ThisBlogThis!Share to TwitterShare to FacebookShare to Pinterest

CURSES TO THE BASEBALL GODS!

Napoli, I am glad you are ok, now get the job done tonight!!! 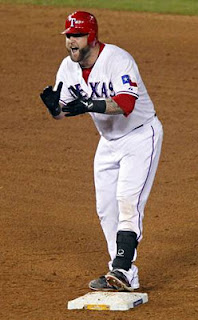 That was the longest, most heart wrenching baseball game I ever watched!!
The Rangers had that game in the bag several times and the Cardinals just kept coming back!!
Did anyone start crying when they thought Napoli broke his ankle??? (raising my hand!)
That was scary!!!
I just hope the Rangers can dig down deep and fight back one more night, one more night of baseball and it is all over...just one more fight left...LET'S GO RANGERS!!! 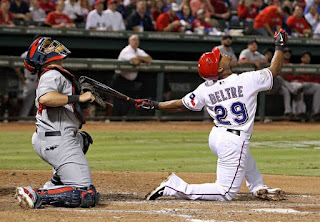 Everybody say a little prayer!!
Posted by Jackie at 6:47 AM 3 comments:
Email ThisBlogThis!Share to TwitterShare to FacebookShare to Pinterest

Wow, have you been watching the world series, these games have been so exciting! I have been wearing my Napoli jersey on game days. I have followed him from the beginning in Anaheim and he is doing great in the series with the Rangers!
I hope we can win tonights game and win the world series!
My friend Tanya lived in St. Louis for some time, so her family is rooting for the Cardinals and I am rooting for the Rangers...how funny that our teams both made it to the world series! Well we decided to make things interesting, if the Cardinals win, I buy her a bakelite bracelet, if the Rangers win she has to make me a purse, I get to choose the fabric and pattern!! So let's all say GO RANGERS!!!!

Posted by Jackie at 12:24 PM 3 comments:
Email ThisBlogThis!Share to TwitterShare to FacebookShare to Pinterest

Take your president to work day!

I had a fun 1/2 hour at work today...The President had to drive down Sahara to go to the east side of town to speak somewhere (they would not tell us where)..so we got to watch them shut down all the streets and block all the driveways with cop cars...this took about a 1/2 an hour, then a ton of motorcycles went by then The President came by and Charlie snapped the photo!
I wonder if Mr. Obama saw me standing there and said "Wow, I like her boots" Hee-Hee!!
Anyway, it was a fun "take your president to work day"...ok, back to work everyone we have taxes to pay!

Posted by Jackie at 2:04 PM 2 comments:
Email ThisBlogThis!Share to TwitterShare to FacebookShare to Pinterest

I added some stuff to my cooking blog..check it out..link is on the right!
Posted by Jackie at 6:22 PM No comments:
Email ThisBlogThis!Share to TwitterShare to FacebookShare to Pinterest

Hi,
I have been working a lot with the hubby, we got busy the last couple weeks!
When I get home I have been getting some sewing done, I made a new purse to go with my western boots this winter. Same Amy Butler pattern as the last purse, but with some slight alterations, little smaller on the bottom, let's just say I got creative with the directions! I did the quilting on the handles but had to consult a pro for the bottom pieces, I paid her with a dinner at Bahama Breeze and a fun night at the Don Henley concert! She said it was a good trade! I am going to attempt the next one strictly on my own, no help!
I am also making a quilt this is the pattern but the fabrics are blue batiks and cream background...So stay tuned for the creativecat is going to be creating lots of new goodies! 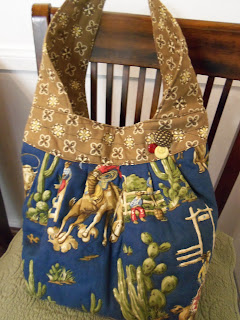 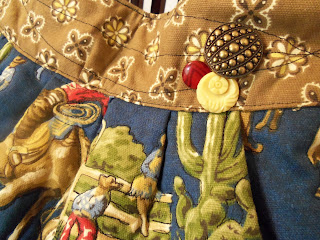 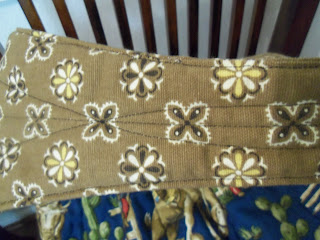 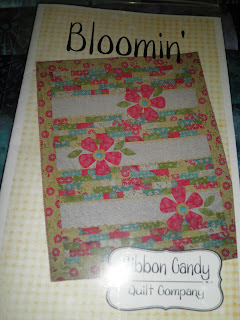 Posted by Jackie at 6:50 PM 7 comments:
Email ThisBlogThis!Share to TwitterShare to FacebookShare to Pinterest

Is anyone enjoying the commercials as much as I am?
I love the Elton John Rocket Man commercial, People are singing what they think Elton is saying in the song, too funny..then at the end they tell you the real lyrics...Uh, That's what he is saying?


Oh and Allstate, Mr. Mayhem commercials, geez, you just gotta love the bad boys! Mr. Mayhem is so adorable as a raccoon tearing up your attic!


And tonight while watching the Rangers play baseball, I see this new car commercial, the kids in the car start singing Crazy Train by Ozzie! Love that!


I must say commercials are getting a little more entertaining! Especially while watching Mike Napoli hit homeruns!
Posted by Jackie at 6:58 PM 2 comments:
Email ThisBlogThis!Share to TwitterShare to FacebookShare to Pinterest

We love to go to Boulder Station on Sunday night..it is our little ritual...we go have dinner at the Mexican restaurant, where everyone knows our name, then we go to the bar and watch football or baseball depending on the season, have a couple drinks and play some keno.
We are home by 9 to go to bed and go to work.
Well, this week Charlie came to me with an unexpected expense, he needed to help Joe pay to get his car fixed, after all they have a new baby on the way, so I decided, no Boulder Station to make up for the expense. Instead I made Boulder Station come to us!!
How is this for creativity??? Yes, they call me creativecat for a reason!
Boulder Station has Paper Keno: 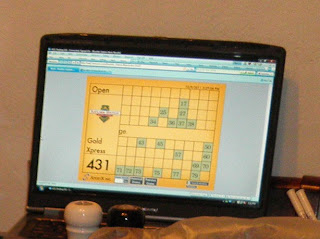 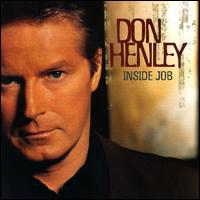 Friday night we got tickets to see Don Henley at The Joint in The Hard Rock Hotel, I knew Charlie liked the Eagles music and thought this may be one concert he enjoys, I was right, he really had a great time!
Don Henley was great, he sang all the hits from the good old days...It was so fun to see Hotel California performed live, and everyone in the audience sang along! I loved to hear him sing Sunset Grill, one of my favorite songs.
What a nice night out that was! 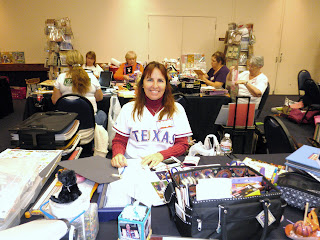 Saturday found me scrapbooking all day at Sweet Retreat in Henderson, this was a crop put on by Chel at  www.sweetretreatweekend.com This was a fabulous day of scrapbooking, she had games and prizes, lots of goodies and even fed us hot dogs and more! It was all halloween themed and so much fun!
This is the candy table set up, all the goodies you can eat! 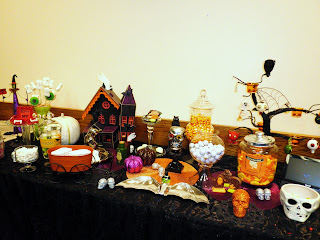 We played bingo for some really good prizes, but I did not win. We also played music trivia, yes, my table won that one...it was all scary movie music! Can you say Ghostbusters and Thriller??
Chel puts on a great crop!
Posted by Jackie at 8:17 PM 2 comments:
Email ThisBlogThis!Share to TwitterShare to FacebookShare to Pinterest

As part of tournament week, Justin Timberlake hosts an annual concert benefiting Shriners Hospitals for Children.
This year's concert theme was "Old School Jam," with artists who have influenced Timberlake. 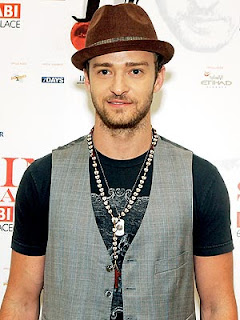 Tanya, Erin and I went to this and had so much fun going back, way back to "Old School".
The concert line-up featured Earth, Wind & Fire, Charlie Wilson (Gap Band), Vanilla Ice, The Commodores, the Sugar Hill Gang, Sister Sledge, Turbo B and Color Me Badd.

It was a real treat to see Earth wind and Fire perform, and Vanilla Ice, and Charlie Wilson was tearing up the stage! Yeah, you Dropped a Bomb on me! That was so much fun! Oh and to hear Sugar Hill Gang sing Rapper's Delight...Oh my gosh that was great, the very first hip-hop, rap song ever and I was there when it first came out!

It was intersting to see that these bands really did influence Justin, you could see his moves and style just from watching the older bands entertain!

We stayed for all the songs hoping Justin would sing us one..but he was having fun hosting and telling jokes with Wayne Brady, they were having a blast up on stage. That was a real treat, JT is a funny guy all the time anyway. So just seeing him on stage was great!

The concert finally ended at 1 AM !! What a fun night out! Thanks Tanya and Erin for "Jumping on the Party Train" with me and "Boogie-ing on Down with me!
Hahahahaha!!
Posted by Jackie at 9:56 AM 3 comments:
Email ThisBlogThis!Share to TwitterShare to FacebookShare to Pinterest

I have been busy the past 3 days because I got the bug to redo the guest bathroom! I just could not take that pea soup green any longer!
So here is the new bathroom, it matches my bedroom, with the aqua and brown. I really like it in there now, I just need a little plant in an aqua planter for the corner of the sink. I love the Better Homes and Gardens towels and shower curtain, from Walmart. Very pretty! And it looks a lot bigger with creamy walls! The stained glass cats were gifts, the large one from Maureen and Ralph, the smaller one from my mom.
Sorry, if the photos don't show the colors right I bought a new camera and they come out yellow and I had to photoshop them, the room is Dove White on the walls, aqua and brown linens, and polished nickel accessories! Ok, I am done painting for the next 10 years! 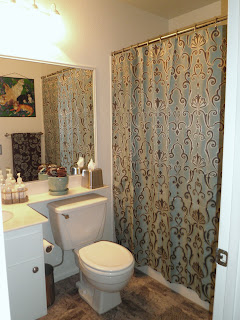 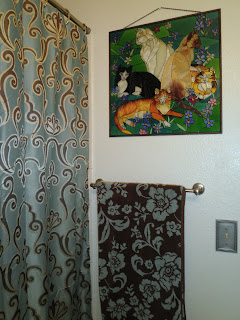 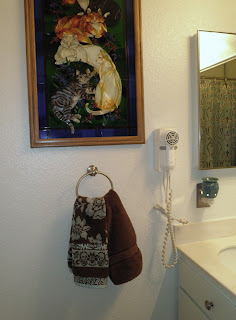 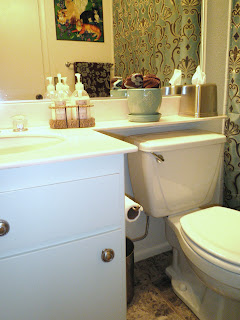