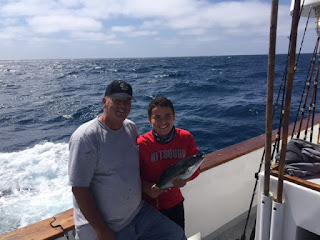 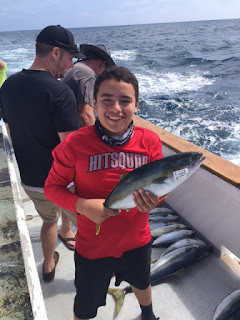 July, time to escape the heat:  115* weather here in Las Vegas during July.
So we head out to San Diego for fishing and baseball.
We take our grandson Ethan with us and he and grandpa can go ocean fishing, this time they did the all day boat, which was a nightmare for them, but they tried it, hated it, and will go back to 1/2 day boat from now on.

Thursday we left, I had to fly because Charlies car makes me car sick, I flew in got our room at the Marquis Marriott and got settled in, then they arrived a couple hours later and we went to dinner at the Harbor House, great place to eat on the boardwalk, after dinner they had to pack up and get on the fishing boat. They departed at 9pm and would arrive back Friday at 6pm.

They thought they would be able to fish all night and day but nope, they had to try to sleep in tiny bunks until they got way out in the ocean, at dawn they got up got to fish a couple hours then head back..so they paid a boatload of money for the same time fishing as a 1/2 day boat!! BUT Ethan did catch a 16 pound tuna all by himself!

Friday while they were fishing, I awoke to have a wonderful buffet breakfast at the Marriott, gourmet food served there, it was nice that we got breakfast included with the room, that food was wonderful, one morning I had new york strip steak with hollandaise/crab meat sauce, I am still craving that today, it was amazing!

Then I headed out to walk the boardwalk and shop in the shops, later I got back to the room and headed to the pool area, gorgeous pool area there as well, I soaked up some sun and drank a pina colada (because that's what you do while lounging poolside, right?) after that I dressed and walked back to the harbor house for a shrimp and lobster roll, salad and a glass of wine. Ahhhh, I love being on vacation!

At 8pm the boys got back, they showered and Ethan went to bed, but Charlie was wired so him and I went down to the Tequila bar for a drink, sat by the fire pit and he talked of their adventure at sea!

Saturday arrived, mmmm, more breakfast buffet! Then we rode the big Seal bus (stands for Sea and Land) because the bus goes from land to sea, yep, turns right into a boat with out having to get off the bus!! The tour guide Jack was so funny and full of tons of information about San Diego, we drove then sailed around the harbor to see the sea lions, they were lounging on the bait tanks out in the ocean.

Saturday night arrived and we headed to the Petco park to watch the Padres play the Giants, yeah, go Buster Posey!!! The Padres won, which is great, it is not about who wins or loses, it is all about being there!!

Sunday we packed up checked out, (but not before eating the delicious buffet again! We parked the car and went to the early game, left a little early to get on the road home, I did the car ride and was doing ok being in the front seat, we made it home, and that was the end of our annual San Diego trip! 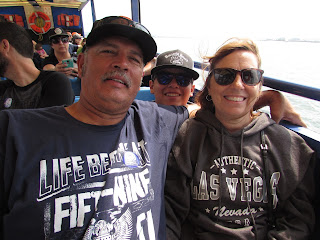 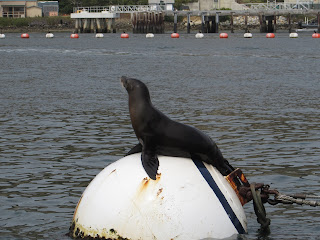 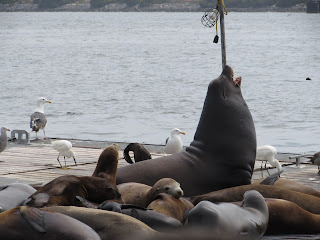 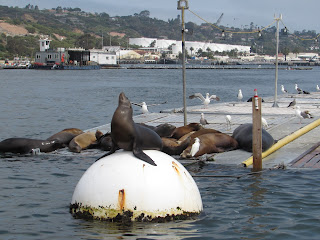 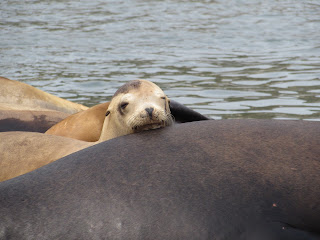 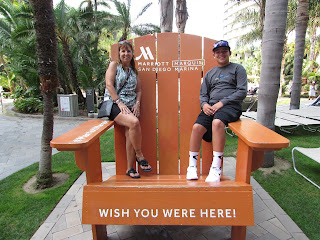 I really had a fun time, even though I was playing on the rocks finding crabs so Ethan could fish, and while escaping the waves I bashed my toe and really messed it up....But this little crab enjoyed eating some bbq potato chips with me!

Well, I hope you get out and have some fun, go somewhere, do something, life is short and time is flying by...so glad we get these times together!
Posted by Jackie at 8:38 AM No comments:
Email ThisBlogThis!Share to TwitterShare to FacebookShare to Pinterest


I was surfing around YouTube looking for nautical card ideas for my stamping and card making....and I came across this video about pearls....I was hooked...it was so fascinating to watch her open up these oysters that people had purchased and we get to see what kind of pearls they got inside!
You can order 1 or 20 or more, it is all up to you...then you wait a day or two and watch the latest upload on youtube and get to see your oyster be opened...You can buy jewelry to have your pearl set in, they have rings and necklaces and more....Well, then they had a Buy one get one free offer going on so I jumped at the chance to get my own pearls...I waited for my video to see what would I get, Oh I wanted a black and white one so bad.....I came really close, I got a midnight blue one and a light pink one, they are so beautiful...I paid the 2.00 extra to have little mounts on them so I could hang them on a necklace, since I use to make jewelry I have tons of necklaces and charms to make a necklace...
If you are looking for a great gift for someone you can buy the  oyster and tell them it is a present for so and so and they will put that on the video when they open the pearl for you!! So much fun!

Here is the video of them opening my oysters, she opens them at the 6;40 mark


I hope you go and support them, they are really great people, and you never know what color pearl you are going to get or you might even get twins! Sometimes you get 2 pearls in one oyster!!

Here is my necklace I made with my beautiful pearls: 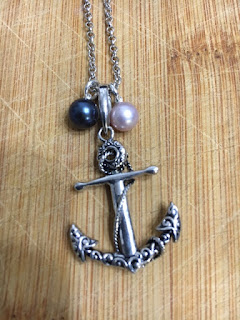 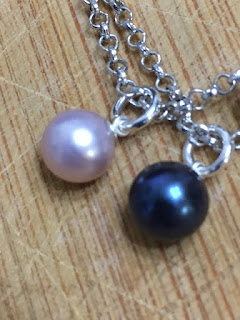 Posted by Jackie at 2:48 PM No comments:
Email ThisBlogThis!Share to TwitterShare to FacebookShare to Pinterest

Roast some split chicken breasts, cool, then chop into small pieces, or use the chicken from a rotisserie chicken. You will need about 1 1/2 cups.

1 can re fried beans, any flavor you like or plain.

Optional: butter to spread on tortillas for baking.
Serve with Spanish rice and salsas for dipping, we like green salsa for chicken, and some queso dip too!!

Line a sheet pan with foil and spray with non stick spray.

Lay a tortilla flat, spread on a couple spoons of beans down the center, spoon on some avocado, cheese, chicken...just a spoonful or two of each item, you need to roll these and place seam side down on sheet pan. Continue until all ten are made. Lightly spread some butter on the top of the tortilla rolls and bake for 20 minutes until browned and heated through.... 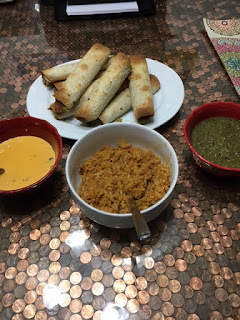 Posted by Jackie at 6:45 AM No comments:
Email ThisBlogThis!Share to TwitterShare to FacebookShare to Pinterest

I have been keeping busy around here, making lemonade, I like the countrytime lemonade mix, very refreshing when it gets hot out!
I have also been making cards for my card swaps, practicing using my alcohol markers, they are really nice for blending colors.
Not much news here, just a nice quiet lazy summer.... 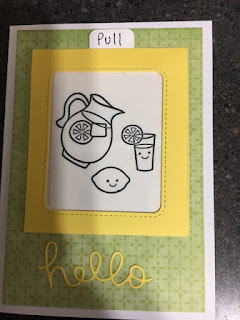 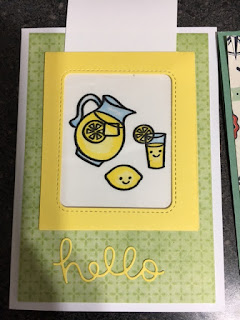 I have not finished my crochet scarf yet...still working on that, but here is my next project to make: 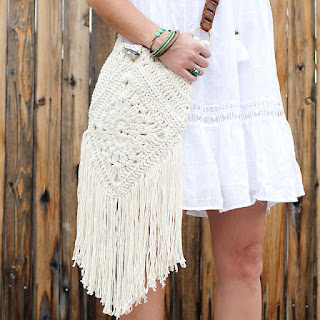 Waiting on the yarn to arrive! Bought an old vintage belt for the strap..oh this will be fun to make!
Posted by Jackie at 7:45 AM No comments:
Email ThisBlogThis!Share to TwitterShare to FacebookShare to Pinterest
Newer Posts Older Posts Home
Subscribe to: Posts (Atom)