Every year for about 4 years now Charlie and I have gone to San Diego for Padre games, just a little weekend get away..last year Charlie wanted to take Ethan (grandson 12 years old now) so they could go ocean fishing, they had a blast last year and they caught a 26 pound tuna! So we decided we would take him every year...Baseball and fishing, life is good.

We took off for San Diego on Friday, took us 5 hours to get there, traffic was super light!
We had a room at the Courtyard Marriott on 6th and J street. Great location, Petco Park is just two blocks down one block over, 5 minute walk. The seaport village for shopping and restaurants is just 4 blocks down to the water around the convention center.

The hotel was nice but they have no restaurant, just a starbucks for morning coffee and snack, also they do not have a pool or spa, which is where I like to hang out while they fish on Saturday. So we will go back to the Hilton on the bay next year! That place was awesome!

Friday after we arrived we walked down the the seaport village and had early dinner at the Harbor House, the ahi tacos were fabulous! Then we walked to the Park and saw the Padres beat the Giants.

Saturday morning the boys left at 4;30 am for their fishing charter, they fished until noon and caught lots of fish, they caught and released. No big tuna this year! I walked to the village and went shopping and just strolled the boardwalk, such beautiful weather!

They got back and showered and we had an early dinner again this time at  Rocking Baja Lobster, the lobster bites were so good and Charlies nachos were Humongous!! We headed to the ballpark and saw the Padres beat the Giants again!! I rooted for San Diego while Charlie rooted for his guy Buster Posey on the Giants! Ethan was happy playing in the whiffle baseball game with all the kids in the park area!

Sunday we got up and went to the Broken Yolk restaurant right down the block, wow, that place was good, I had a breakfast quesadilla, it had black beans and chorizo...oh I miss it already!

I can't wait for next year to get here! 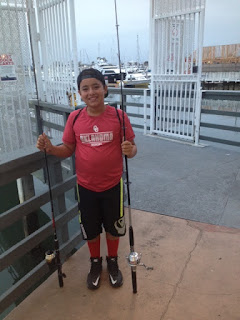 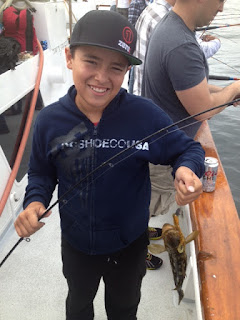 Posted by Jackie at 5:01 PM
Email ThisBlogThis!Share to TwitterShare to FacebookShare to Pinterest

That kid is so dang cute! look like you guys had a ball