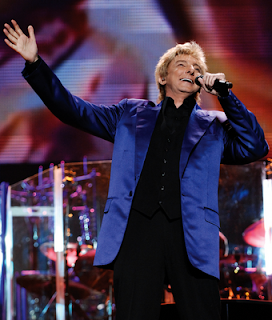 My friends had been teasing me about going to the Barry Manilow show, I told them, "no way would I go see Barry Manilow" but then everyone was going and talking about how great it was, and I thought well OK, I will go and see it, just so I can say "I saw Manilow" when he had a great run in Vegas.

Charlie and I, Tanya and Colleen ran up to the Paris and saw the show, Charlie was not happy but sat along with us. I have to admit Barry Rocked the House! It was a great show, I am so glad they talked me into going to see him. If you get the chance go to the Paris (my favorite hotel!!) and see Barry, he tells his life story in song and it is so cool, who knew!

Colleen was kind enough to sit with me at while I ate my favorite meal at LeProvencal restaurant, Yes, the brown butter raviloi's!! YUMMMY!! (recipe can be found on my cooking blog) Tanya was not able to get there till later and Charlie wanted pizza, so thanks Colleen for sitting with me and having your salad and water...I love those ravioli's!!

Have a great weekend!
Posted by Jackie at 7:37 AM
Email ThisBlogThis!Share to TwitterShare to FacebookShare to Pinterest

You liked it, you really LIKED IT...you little Fanilow, you! ?Had a fabulous time, as always...I love you guys!

HEY....WAY COOL!!
I'D LIKE TO SEE OL' BARRY JUST TO HEAR "COPACABANA". I LIKE MANDY, TOO.
YOU ARE LIVING THE LIFE I WANTED WHEN I WAS YOUNG! ROCK ON LITTLE LIZARD!
LOVE, MOM.